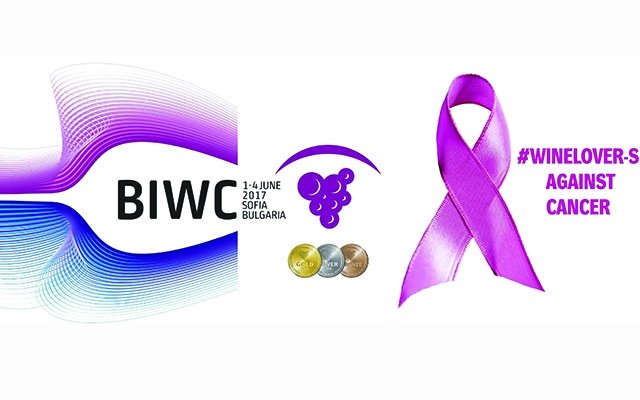 1 to 4 June, 2017 in Grand Hotel Sofia.Bulgaria will become again the spotlight for the world wine community and therefore one of the objectives that  BIWC has set  is the launching  of campaign against breast cancer, which goes around the world under the motto: #winelover against cancer, to raise awareness and ways for prevention of the disease. During the BIWC  #winelover against cancer t-shirts can be purchased and together with the tickets fund raising will help to buy and to provide the necessary help.

This campaign has involved more than 20 000 people already from around the world who are united in the group #winelover. The campaign was launched in 2015 and will be held for the first time in Bulgaria. The idea for the campaign came from the fact that the creator of the world movement #winelover, Luis Alberto will be part of the international jury of the Balkan International Wine Competition 2017., who together with Patrick Farrell  MD, MW initiated this noblecause.

One of the partners of # BIWC2017 #winelover agaist canceris the  Balkan Fashion Week, which will broadcast the launch of the campaign live from Sofia to Paris,  Barcelona, ​​New York, London, Moscow, Tokyo, Lisbon, Milan and others.

The organizers have prepared a rich supporting program  for both wine professionals and wine lovers.

The sal Caroline Gilby MW was named “Wine Celebrity of the Balkans” during the official gala dinner after the end...