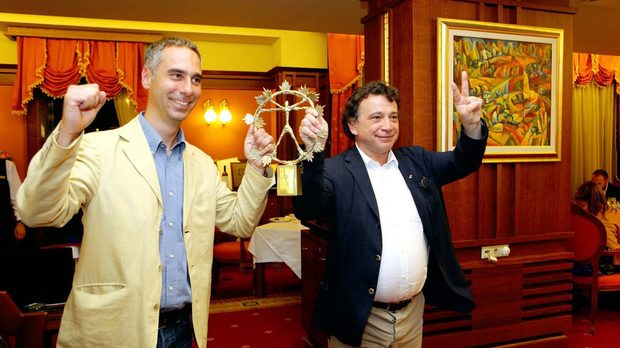 Two wineries – the Bulgarian Edoardo Miroglio and the Serbian Matalj Winery – shared the Grand  Trophy of the Balkans International Wine  Competition (BIWC) 2015. This is a precedent in the four-year history of the event, but the competent judges have voted decisively for both wines. The winners are the sparkling wine Special Selection Pinot Noir & Chardonnay 2005 by Edoardo Miroglio, Bulgaria and the red Kremen Kamen Cabernet Sauvignon 2012 by the Matalj Winery, Serbia.

The other prizes are :

Stefan Bozhkov, chairman of the commission, together  with the members Emanuela Kovac and Emil Maslarski, has given his assessment of best wine label design for the second consecutive year.

The  Trophy is  dedicated to the memory of the Bulgarian artist Kolio Karamfilov, who is the designer of the BIWC Grand Trophy.

“The Balkan region is very special, and we, as organizers of the BIWC, do everything in our power to present the wine sector in the best possible light”, said Galina Niforou, managing director of BIWC, regarding the fourth edition of “Balkan Wine Festival and Competition” (BIWC) during its opening. The prime-minister Boiko Borisov and the mayor of Sofia Yordanka Fandakova sent their congratulatory regards to the organizers of the international event, which emphasized the festival’s special significance for popularizing Bulgarian wines. Eng. Krassimir Koev, executive director of the Executive Agency of Vineyards and Wines, made a special address to all organizers and participants in the event on behalf of the Minister of Agriculture and Foods Dessislava Taneva.